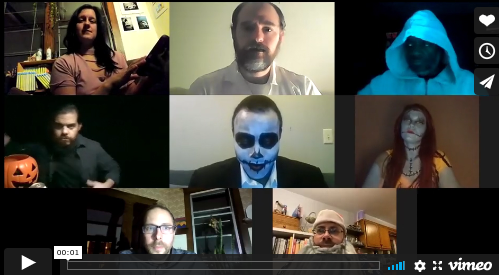 I enjoyed the script reading by seven actors from the safety of my home on Friday, November 13th. It played on Vimeo, a video sharing website that has a smaller user base and is similar to YouTube. Themes center around Jack Skellington and his attempt to become the Spirit of Christmas in a town known for its Halloween. Jack is the pumpkin king who is Halloweentown's who has become bored with the same annual routine of frightening people in the "real world" and has come upon a door that leads the way to a town that practices Christmas. When he returns from this happy town, he strives to bring this holiday with him.  Try as he might, Jack Skellington failed to become the proper Santa, but I think we can all learn about failure through trial and error through the viewing of this production.

Throughout the show, the narrator rings a bell and whenever certain words or phrases are said by actors the audience takes a drink. To hear the theme song 'This is Halloween' and watch as actors balance drinks and attempt to synchronize is more than entertaining. With Sally Shock (Kelly Nelson) in the center of this tic-tac-toe box, her role couldn’t be more important as the sweet voice behind a film that blankets its charm by taking an opposite approach to the holidays. Everyone is in dark clothing, and many incorporate black backgrounds. Characters: Lock, Shock, and Barrel hold up masks periodically that may haunt you for days. One in particular looked strikingly similar to the horror mask from 80’s hit film Jason.

Actor Christian Jacobs was a standout. He played numerous characters, including Lock and the vampires, the clown with the Tearaway Face, a saxophone player-musicians, Spider Boy, and the Little Human Boy. In the beginning his hands are up like that of a conductor waving to keep the introductory tune. His all-black ZOOM window gets the desired effect with a dim spotlight cast down on him as he moves closer to the camera showering his audience with ghoulish grins and out-this-world facial expressions.

At the time I viewed Nightmare Before Christmas in 1993, I felt charmed by Jack Skellington and his long gangly legs and skeleton face. The fantastical setting had been something I never seen before in childhood movies. I might add that I felt more charmed by this Jack Skellington (Peyton Dixon) and his painted smile and non-stop energetic gestures. But I wonder, as an adult, if I would have enjoyed the 90’s film with the same elation. Hundreds of YouTubers have been able to create this film, each one more dynamic than the rest. But none of them have had to negotiate the task of pulling together a cast from several different settings on ZOOM. If anything one can admire the creativity behind Shadow Horse theatre, LLC. Actors did their best to give cues to one another but the varied backgrounds and actors' proximity to the camera were obstacles. This is going to be an ongoing challenge for many entertainers as they show their creativity online during a pandemic.

I often worry if Generation X will even remember a time when they sat down next to one another in a theater, nudging each other and hooting and hollering while sharing nonverbal cues. Surely drinking while watching anything entertaining is never going to cease but there is something to be said about the theatre and arriving there together on time. As it was, the only way I knew anyone else was engaged in this performance is by indicators on social media like invitations to the performance, that said check the box ‘Yes’, ‘No’ or ‘Maybe’ if you are attending. At least 20 checked ‘yes’ and a large quantity checked ‘maybe.’ How easy is it to check ‘maybe’ and not be held accountable for the arts in this day and age?

As performers and audience members, we can all learn about the art of showing up and taking accountability even if we feel like we’re failing. The Drinking Game-Minnesota has shows monthly, and the December show will be Muppet Christmas Carol. Tickets are online and go online two weeks before the show. More info https://www.phoenixtheatermpls.org/project/the-minnesota-drinking-game/