This week I spent a lot time with the family making cookies, including peanut butter bars and a "Better than Robert Redford" cake. We also watched the James Webb telescope launch into space. 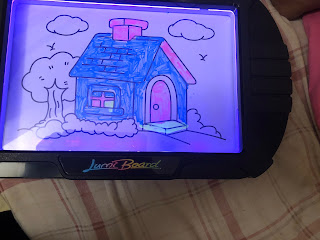 And we talked about the neuralink: a device that will be surgically implanted into your brain to communicate with machines and even control them. Originally it was proposed to help with spinal issues but it may have the potential to do much more. Its nice having a brother who is a computer programmer.  He's fascinated with astronomy, (not astrology lol) 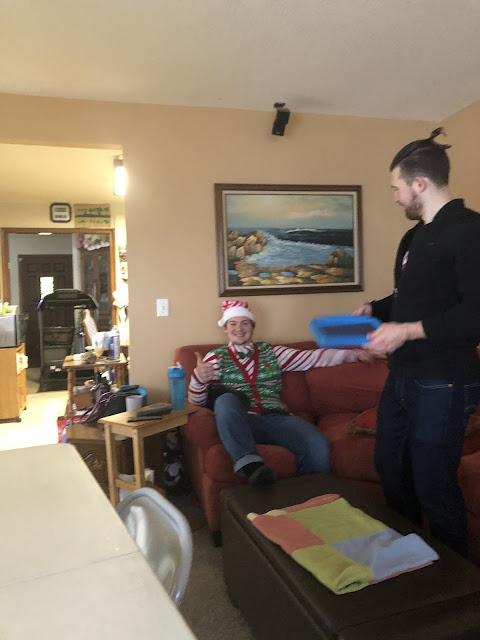 My nephew Nathan in his Holiday Sweater 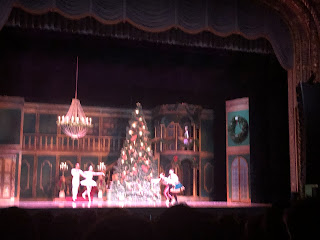 from The Nutcracker Fantasy I went to this week 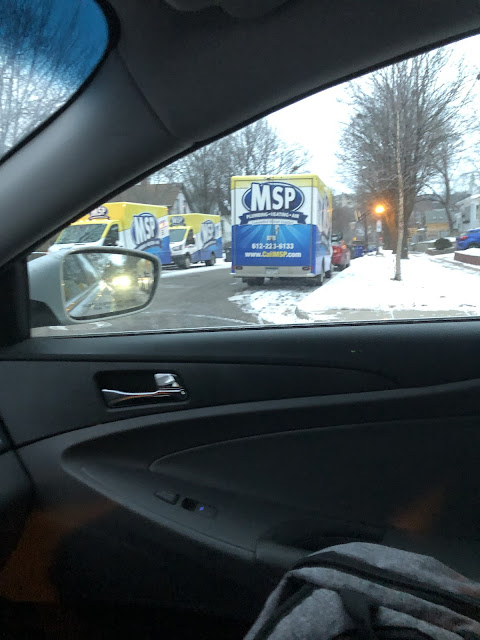 I saw six of these MSP trucks  outside, I'm assuming the block had Heating issues and it's been cold in Minnesota

I liked this Holiday Book.  I've read most Jane Green's books and there was something very intriguing about the heroine's misconceptions about her first love during the holidays when she brings him home to her family. 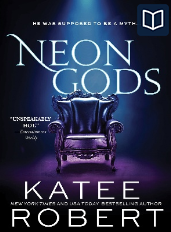 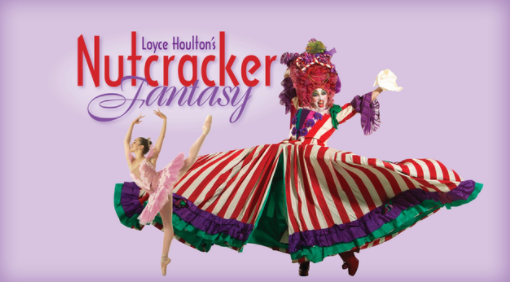 December is perfect for watching a holiday show like The Nutcracker Fantasy. Minnesota Dance Theatre (MDT) is showing it until December 19th at the State Theatre in Minneapolis.

Email ThisBlogThis!Share to TwitterShare to FacebookShare to Pinterest
Labels: review

I had an interesting week. I drove a bit for UBER and received a ton of tips. One guy forgot his phone and when he called the number popped up as "Bride".  The guy told me him and his wife had been married for thirty years which was nice. I told him how my adoptive parents had been married for that long as well.
I picked up a woman who said she was having a flair up on her way to an Al-anon meeting and I turned around and drove her home.

I got some shopping 🛍 done and bought ingredients for cookies. This week my sister went with me to see "The Nutcracker Fantasy" at the State Theatre and we talked a lot during intermission. Catch my review on my blog.

My son Zulfi (four years ago) with his uncle Uri

Here's a fun survey I took.

What is your favorite color? blue, sometimes turquoise

my golden birthday. I still remember it too, because we went to Micky Dee's and I saw Ronald for the first time and he only somewhat scared me.

Letter of the alphabet? R-

I never struggled with sounds of letters but I'm fascinated with people who do, and love the british accent in particular.

Domesticated animal? dogs-their fun. I don't have one currently but often dream of a owning a small dog that I don't have to walk everyday.

Wild animal? pandas, anything docile. I kinda dislike squirrels and rodents.And will dodge them if they cross my path.

Mountains or ocean? Oceans. I've been to both coasts and I cherish these experiences, having to live in the midwest with flatlands and people constantly dodging the cold and keeping isolated.

Long drive or long walk? I'll take a long drive. If I can rent a luxury car I find that more appealing than the vacation itself.

on your blog and showcase books and things  received. Share news about what is coming up on our blog for the week ahead. See rules here: Sunday Post Meme

It snowed like a foot in Minnesota on Friday. I was prepared for it (somewhat). I had received a message from St. Paul schools asking parents to pick up their kids early, if possible, so I did. I got some supplies and hunkered on down for the night. Snow is real in Minnesota. The next morning, I could hear the plows coming through.

Earlier in the week, I went to two shows including "Anastasia" and  "The Christmas Carol" at the Guthrie with my sister.
This year's performance had a reveal that was unbelieveable!! And I noticed "Scrooge" walking home after the show and called out to him. Seeing him made me feel like the show was still going lol
I spent some time working on screenplays this week. I didn't do a whole lot of improv or UBER driving. I had slight cold and drank lots of cinnamon tea. Caribou has this unbelieveable tea that I can drink for days.
Otherwise, I also went to see the Nutcracker through a smaller ballet company and hopefully I'll go see another "Nutcracker" at the state theater this week.
Upcoming shows 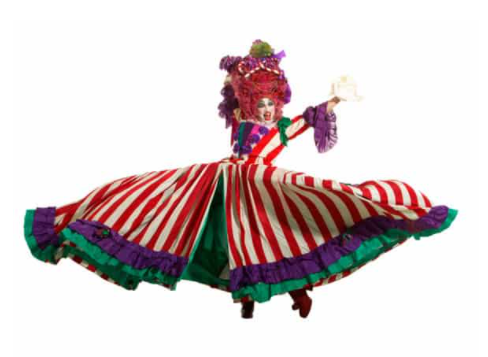 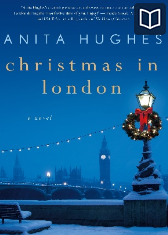 I liked this one. The MC gets spotted by a baking show employee while she's making cinnamon rolls in a shop in New York and then the show flies her to London to be on their show. It was cute. There were moments that I thought the MC had a negative tone but maybe its all the travelling that got to her. 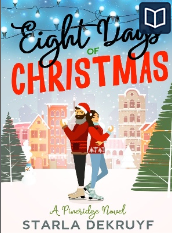 Synopsis: Ready or not, Isabella Whitley is returning to her snowy hometown of Pineridge, Colorado for her sister's Christmas wedding.
This is turning out real cute. I'm not one for car trip books (maybe because I do so much driving) But was short and then were in Colorado. The Love/hate romance is cute, and the characters seem to be coming of age. I like how the MC just has to get back to her hometown in order to celebrate her traditions with family.

'Anastasia' in Minneapolis: This is a princess story with fantastic musical scores

Anastasia the musical has played to sold out crowds on Broadway and across North America and now it's being shown by Hennepin Trust at the Orpheum Theater in Minneapolis.

Stephen Flaherty’s script is inspired by the Twentieth century fox motion pictures. Anastasia was the daughter of the last Russian tsar, Nicholas II. After she and her family were executed, rumors claimed that she might have survived. Ten years later, Anastasia is suffering from amnesia and goes by the name Anya. She is persuaded by the con man Sergei Bounine to pose as the grand duchess to stake a claim to the Ramonov fortune.

In the first act, the year is 1916 and young Anastasia (Veronica Raejiao) is introduced along with her family. Anya is hoisted on the shoulders of her father as he sings and dances with her (choreography by Peggy Hickey). All the characters wear lavish 20th century suits and gowns designed by Linda Cho. The palace is digitally set ablaze in fire by the villain, Gleb (Brandon Delgado) who represents the communist regime in a post-imperial Russia. Gleb was tasked with carrying out the assassination of the entire Romanov family. This scene is quite dramatic.  Red flames engulf the backdrop and falling debris creates this display of tension and fear as the Romanov family release death hollering screams. The scene of pure evil would be shocking in a family musical forty years ago but in this day and age, kids have seen it all.

continue reading
Posted by Trin Carl at 7:08 AM 1 comment:

Bridges of Madison County meets Nancy Drew: Girl Detective in The Bungalow Loft by Shanan Custer, directed and produced by Dawn Krosnowski. This heartfelt and funny mystery is a stage
continue reading
Posted by Trin Carl at 7:56 AM 1 comment:

If you enjoyed Little Women by Louisa May, you may like the musical. It is being directed by Tamara Kangas Erickson showing at Artistry Theatre in Bloomington through November 28th.

Little Women is the story of Jo March (Madeline Trumble), a writer who rebels against 19th century conventions. Jo has three sisters; the eldest sister Meg(Camryn Buelow), along with timid Beth(Lauren Hugh), and romantic Amy(Shinah Hey).  Then there's the mother, Marmee(Kersten Rodau), and the wealthy, disapproving Aunt March(Angela Timberman) who is a source of strength and inspiration for Jo but also her nemesis.  Jo would rather travel and write adventure novels than follow customs and get married, a plan complicated when she meets the socially naïve Professor Bhaer.  Except for timid Beth, the other sisters find their suitors as well. The play travels in time between the childhood home in Massachusetts and Jo's college in New York.

In the first act, strong shouldered, straight back Aunt March brings a very comedic vibe to the play.  She looks at Jo with a serious face and says, “You should be saving yourself." and Jo responds with “I don’t need saving.” 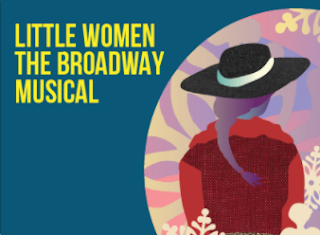 Aunt March often chides Jo as she cuts her hair short and acts decidedly unlady-like by speaking her mind and wearing odd fashions. It’s delightful to see Aunt March’s reaction when she wins her games of manipulation, like The Little Mermaid's grand villainess, Ursula.

Meg is Jo's opposite, her femininity and damsel-in-distress roles are hilarious as she collapses on a sofa to feign a sprained ankle after dancing with her love interest, Mr. John Brooks (Matthew Hall).

A scene in which Brooks lays on the ground pinned there with a knife leaves me smiling. I want to get up on stage and sword fight with the actors or lead like Jo did; directing the choreography for fight scenes with my hands.

But what impressed me the most was Mr. Lawrence (Brian Frutiger) whose grumpy disposition was reminiscent of “Scrooge.” He entered the scenes with a strong voice. His playful piano playing was a nice juxtaposition to a musical that could have added a few more comedic beats, if the script would have allowed.

The orchestra led by director Anita Ruth did a fantastic job of being in sync with the performance, a strong feat considering how the actors improvised instruments and often sang in staccato phrases.

Little Women contains themes of femininity, love, and sacrifice. It is a musical that defines love.  As Jo says "We don't love for society, we love for what's inside us."

Come see a musical that will promise a great night out with the family.  Tickets at artistrymn.org