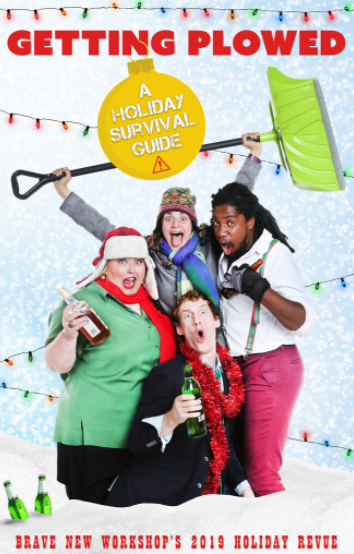 Getting Plowed, directed by Caleb McEwen is a holiday show that takes a naughtier-than-nice look at the holiday season with a satirical edge.

continue reading
Posted by Trin Carl at 3:22 AM 5 comments: 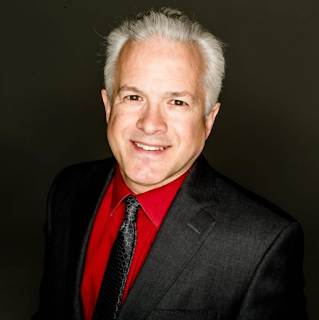 In Minnesota, everyone and their mother has either been to Chanhassen Dinner Theatres or, at least, heard of it, and Stevie Ray’s is no exception. In 2010, CDT invited the Comedy Cabaret and it’s school of improv to the theater and it's been performing there ever since.

Actors: Joden Kohls, Ellie Walton, Brett Williams, and Kip Hathaway, Aaron Cook were standing stage as the lights go up, as if they’re carolers with sheet music in hand. All eyes were on Stevie Ray, the host, who asked for prompts from the audience such as an Easy-Bake Oven, which makes for a cabaret song where the actors sang in rhyme, telling us what the oven is really good for--everything from cooking crack to melting your G.I. Joes.


In ‘Human Slide Show,’ the lights and sound crew controlled the game. The location prompt was Switzerland.  "In this slide we see how drinking leads to fighting in Switzerland,” a cast member said. Two actors stood statuesque, their fists up to one other, ready to fight. The lights go down and then come up again, like an old slide projector and an actor was looking into the distance with his hand shielding his eyes: “Oh, that’s my young daughter looking for the Swiss Alps.” The actor called for a new frame.  This time the performer was reaching up as if he’s grabbing for something: "The slide is upside down, let me reposition it.” This time the actor was repositioned, his feet towards the ceiling with a pole to help him balance.

Twelve days of Christmas became eight days of Hanukkah with suggestions from the audience. Stevie greeted patrons at their chairs and asked what funny gifts they’ve been given. “Six bottles of beer,” someone replied.  "Seven throwing-up children,” said another.  Towards the end, the audience is asked to help finish the song.

I liked how the improvisers took the time to greet patrons as they were leaving and they were all friendly enough to talk shop with me for a few minutes. “You see, you didn’t even get picked on when you were sitting in the front,” Stevie Ray jokes. Brett Williams also told me an interesting story about his humble beginnings as an actor and about free outdoor improv comedy shows in the summer on Sundays in Chanhassen (across from Klein bank). Matt Dorland, the musical director, also spoke to me about comedy cabarets in the Twin Cities he was familiar with.


I plan to come back.  Much like Whose Line is it Anyway? I know each show will be different yet clean, for an adult audience and fun. Come see this fun troupe perform. Tickets are $28. Dinner is optional for $15. The theater is ADA accessible and parking is free. 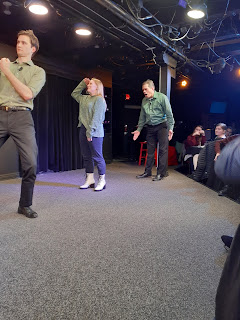 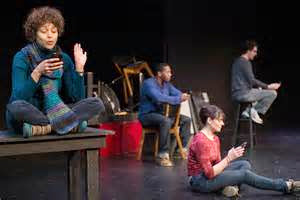 Today's post will link up to The Sunday Salon, The Sunday Post and Stacking the Shelves for weekly updates.

This is a traditional thing that I enjoy doing-It's a bucket list of goals I accomplished throughout the year. This list is inspired by my Yoga teacher who had us do a few years back. It helped me think about my intentions.

(click on any of the links below to learn more about my adventure)
Wrote a short novel
Took a body pump class
Took a SQL class
Drove to Duluth for a TV Film fest
Met writers in Duluth who wrote for David Letterman and Barbara Streisand
Wrote Monologues for actors to perform
Went to Wisconsin 3 times
Zip lined at a local playground (so close to the real thing)
Did improv (on stage) multiple times.
Went to three water parks
Taught Zulfi how to be a zombie
Kayaked on Lake Minnetonka and Bde Maka Ska
Drove for Uber and Lyft

Learned about Buddhism
Congratulated my brother on the birth of his twins in December
Interviewed (on my blog) a bunch of great actors
Went to my first opera!
Went to at least 30 plays

Reading:The Book of Secrets:112 Meditations to Discover the Mystery Within by Osho

Sunday: The Sunday Post
Posted by Trin Carl at 4:42 AM 5 comments: