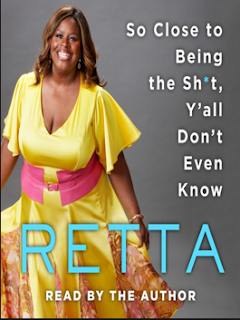 So anyone who knows me, knows that I love comedy.  I started listening to this audio book by Retta called So Close to Being the Sh*t, Y'all Don't Even Know. Retta is an actress/comedian.  And boy is it funny!!
via GIPHY
At one one point Retta said something along the lines,

“I wasn’t intimidated to work with the Queen B, Beyonce. At that time she hadn’t come out of her shell yet, she just finished the Austin Powers -film and Goldberg-although Goldberg wasn’t much, and she had just became Beyonce, after starting her career solo, and leaving Destiny’s Child."

I was like damn Daniel! This woman is confident. I had to look her up and saw that she performed in Good Boys and Where's the Money. She also said, she likes to Google herself, so I hope she comes across this post one day.

Readers are there any comedians that you just Love, Love, love?

Listening: So Close to Being the Sh*t, Y'all Don't Even Know by Retta,

Email ThisBlogThis!Share to TwitterShare to FacebookShare to Pinterest
Labels: @kimbacaffeinate, comedian, Memoir, Retta, So Close to Being the Sh*t, Y'all Don't Even Know