This week, I've been watching videos on Youtube that have to do with Ex-pats in Korea. 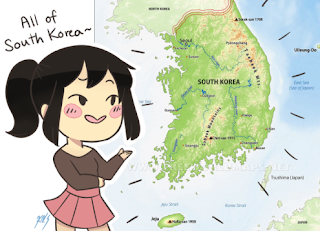 Many people don't know this but about me, but I've spent a week in Korea. (Not North Korea, lol)  I had a contract to teach English, but due to the culture shock and homesickness-I came home.
I've been enjoying hit sensation Megan Bowen and her life in Korea.  She's been living there for more than six years.  She's got a channel called Chonunmigo oksaram.  She shares her thoughts on what it's like to be a foreigner in Korea and learning about clothes, food, and places to go.  Some of the places include tanning salons and themed cafes where you can take your date.  I actually learned from Megan that if a Korean guy gives you his number, he's apt to call you right away and keep calling all day.  This is to show his interest in you and in Korean culture this is NOT a sign of desperation.  Who would have thought, right?
I, personally, have plans to visit a lot more countries, including, Ireland, Saudi Arabia, Morocco, Pakistan, India and a few more.

Readers, if you want to comment-do so at the bottom of this post.

Up Coming: Lots of interviews with screenwriters and musicians in October.  Stay tuned.
Posted by Trin Carl at 10:30 PM