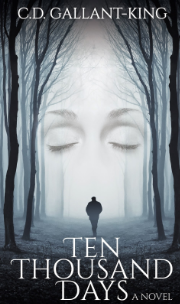 Joining me today is author, C.D. Gallant-King. C.D. was born and raised in Newfoundland and currently resides in Ottawa, Ontario.

He has published two novels you can read, Ten Thousand Days in 2015 and Hell Comes to Hogtown in 2016. He has an ongoing series of dark comic fantasy stories called Werebear vs. Landopus, which is available on Kindle Unlimited. His work will also appear in Mystery and Horror’s upcoming humour/speculative fiction anthology, Strangely Funny IV.

And onto the interview....

So C.D, what have you written?
I’ve written I believe ten novels and dozens of short stories, but most of them are still sitting in the basement in the little room under the stairs I affectionately call The Closet. I’ve self-published two of those novels - Ten Thousand Days and Hell Comes to Hogtown. Both are technically urban fantasy, but Days leans more toward fantasy and romance while Hogtown leans (really hard) into comedy and horror. I’m also self-publishing a dark comic fantasy series of short-stories called Werebear vs. Landopus. The second installment, “Revenge of the Lycanterrancephalopod,” was just released. I also have a story appearing in Mystery and Horror’s Strangely Funny IV anthology of humorous speculative fiction.

Did you do a press release, Goodreads book launch or anything else to promote your work and did it work?
My writing career is a series of baby steps and experiments. Each time I release a book I try a little more, to see what works and what doesn’t. I’ve done blog tours and podcast interviews. For the last book I did a video trailer. I’ve given away more free copies each time, hoping for reviews and feedback in exchange. I’ve done a few small promotions and a little advertising.

Has any of it worked? Maybe a little. I haven’t spent a ton of time or money on these things, so I didn’t get a huge return on them, but a little promotion will give you a little response. Maybe one or two sales. It may not seem like much, but do you know what no promotion will get you? Zero sales. So a bare minimum of shilling your work is required just so people remember you’re alive.

You're right about that one C.D. I find that the more an author publishes the more they get noticed. And it can't be a huge time span between each book. I look at how many books Amanda Hocking has published and say, "Now that's a woman who knows how to market and write at the same time!"

I haven’t put a ton of effort into marketing because what am I marketing? Two books and a couple of short stories? That’s what I currently have on Amazon. And they’re all very different in tone and style. So even if I convince someone to read something and they like it, there’s no guarantee I have anything else they’d like, so what’s the point? If I turn them off as quickly as I win them, I haven’t gained anything. But if someone can read two or three of your books and enjoy them, they’re more likely to become a fan, and more likely to tell other people about it, who may buy even more books. The marketing will pay off a lot more than just making one or two sales.

Do you proofread/edit all your own books or do you get someone to do that for you?
I proofread and edit, everyone should and you need to be able to do at least a cursory revision of your own work. Authors should be their own worst critic, and not be afraid to cut out anything that doesn’t serve the greater purpose of the story.

That being said, getting someone to help you edit or proofread is non-negotiable. You have to do it. No matter how good you are, someone else will always point out errors and typos, and more importantly, they will tell you when something is stupid and should be changed. You need a second set of critical eyes on your work (sometimes three or more sets). If you can’t afford a real editor at the very least find a friend or family member who is well-read and/or an academic (preferably both) who is willing to help you out for beer and pizza. A well-read reader should be able to pick up plot holes, weird pacing, bad tropes and clichés, and other story errors. An academic will help you with grammar.

I’ve had the pleasure and good fortune to work with freelance editor Amy Allen-Macleod on my last two books. If you’re looking for an editor, be sure to check her out at: https://amyallenmacleod.com/

Which writers inspire you?
Terry Pratchett, Kurt Vonnegut, Christopher Moore, Neil Gaiman, Stephen King, Cormac McCarthy, Ken Follett, Chuck Palahniuk. I'm currently really digging PG Wodehouse. My first book, Ten Thousand Days, was my take on Gaiman. Hell Comes to Hogtown is my Christopher Moore. I have other unpublished works that are takes on Pratchett and Palahniuk. I suspect (at least hope) my author voice will end up being some unholy combination of all of those, I’m still working on it.
Last question C.D., do you have any advice for other authors on how to market their books?
Don’t do what I do?

Seriously, I really don’t have a plan. I’m winging it and playing it by ear, trying different things to see how they work. I don’t have a serious career path in writing at the moment, so I don’t have much to lose. But if you do want to make a serious go of it, you have to make a plan. Know exactly what you want and find some way to measure it. Do you want a review in X magazine or website? Do you want to gain 10,000 new followers? Do you want to increase your sales rank to top 100 on Amazon, or sell X number of copies per week? Pick a target and then figure out a logical way to get there. Talk to professionals and people who have done it before (definitely not me) to make a realistic action plan. I think a lot of writers put out a book or two and then kind of float nebulously, wishing they got more sales but not really having a plan to get there, and then they are disappointed when nothing happens. Don’t do that. Pick a road and stick to it.

That's all the time we have today folks. Thanks for joining me C.D.


How to get in touch with C.D.

Readers, if you have any questions or comments for C.D. please comment below.