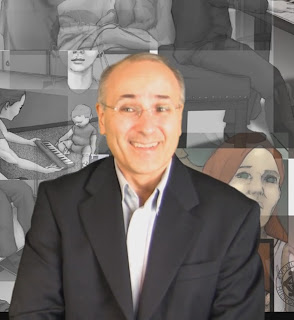 Joining me today is Joseph Cillo, Jr.
Joe is the writer and creator of Blind Prophet comic books and graphic novels. He has been inspired to write screenplays and graphic novels with an underlying religious and moral viewpoint, along the lines of some of the twentieth century masters like Graham Greene, C.S. Lewis, G. K. Chesterton, and J.R.R. Tolkien.
Screenplay titles currently to his credit are: “Carlton St. Michael in the Afterlife,” a comedy; “When the Wood is Dry,” a drama / crime drama, and “Blind Prophet,” a science fiction/fantasy. He is busy at work at this time converting the screenplay for "When The Wood Is Dry" into a full length novel, which should be released sometime in 2017 on the Kindle platform.

Joe, which writers inspire you?

I am very much inspired by the twentieth century Catholic/Christian writers like Graham Greene, C.S. Lewis, and Flannery O'Connor.  I find there is a greater depth to works that deal with issues from a religious perspective.  If a writer creates a character who does not take a position on whether or not there is a God, or how that God may or may not be at work, it is just not a realistic character.  It is a defining question for characters, and their position on that question changes everything, just as it does in real life.

So, what have you written?

I started writing screenplays when I saw an interview with a Hollywood movie producer who suggested that if you don't like the movies you're seeing, you should write your own.  But writing a movie is a long way from seeing it on the screen, about as far as a blueprint is from a building!

I have written three screenplays, and have begun two more.  But, I've concluded that however good a movie might be made from my screenplays, it won't end up being anything like what I have conceived, given the modern movie-making process, unless, maybe, I had a fan base who would be really cheesed off if they saw a story they loved butchered in a movie badly done.  But, it is hard to build a fan base around a movie script!

So, I have turned one, Blind Prophet, into a graphic novel, published in comic-book-like episodes, and am converting another, When The Wood Is Dry, into a full length novel.  I may also eventually turn my first screenplay, Carlton St. Michael In The Afterlife into a novel, or possibly a graphic novel.  This one is a comedy, about an anti-Catholic comedian who has a near-death experience, and discovers he may need to change his act.

Blind Prophet was conceived of as a kind of big, high-stakes, comic book movie, featuring a more Christian-type of hero.  One meek, and humble, of little worth in the eyes of the world, but who would end up being the key person in saving the world, while never raising his hand in violence.  A kind of writing challenge to create the biggest character arc possible.  I came up with a boy born blind and autistic, rejected by his father as defective, who gains a power to peer into the spiritual realm, and understand the temptations facing the characters he encounters, before they choose to do something evil.

When The Wood Is Dry was conceived of as a classic Shakespearean-style tragedy.  It is a rather brutal and shocking story of a seventeen year old girl who clings to her faith through her suffering, wrapped in a crime drama / detective story.  The title is from a bible quote, when Jesus meets the daughters of Jerusalem as he carries the cross and says, "Weep not for me, but for yourselves and your children.  For if these things happen when the wood is green, what will happen when it is dry?"

Blurb from Blind Prophet: The story is about a boy, born blind and autistic, who undergoes an experimental procedure to stimulate his vision, that gives him the ability to see into the spiritual realm, where demons tempt, and angels defend. We call the Blind Prophet a New Kind of Hero... We dedicate Blind Prophet, "For all the superheroes who never were given a chance...

You'll have to read the book when it comes out to find out...

What are you currently working on and what is it about?

I am currently working on the rewrite of When The Wood Is Dry, which is with my editor right now.  I am also working on promoting Blind Prophet, and working with the artist to complete the remaining 3 episodes.  I also have begun a romantic comedy, for which I have nearly completed a draft of a screenplay.  I seem to be having a little difficulty settling into a specific genre, but after spending so much time in the depths of When The Wood Is Dry, I need to follow it with something much lighter.  The heaviness of the material has really taken a toll on me...

What drew you to write in this genre?

So, I write in various genres, but a common theme is exploring the moral dimension within the soul, at times in a very explicit way.  Discovering the works of Graham Greene drew me to this kind of emphasis.  I remember thinking, "Wow, people actually write like this?"  Most of what I had read before might hide or disguise religious themes within the work, but Greene just went full-on into it, with a kind of religious, moral dimension as a reality to be confronted in the consciences of his characters.  That gave his work a kind of depth and dimension that was lacking even in many of the other excellent works of fiction I had read.  I guess I'm a little like Greene, in that I write in various genres, as well.  I just wish I could write as well as he did...

How much research do you do?

The internet provides a way to research most of what I need to write fiction.  I am perhaps a little lazy on this score, but one of the benefits to writing fiction is that you can just make stuff up, as long as it fits within the fictional universe.  Like, in When The Wood Is Dry, I was looking for a setting that had a public trail to a scenic view over a cliff dropping to the ocean, and a town within walking distance.  Well, I really could not find a place like that, so I made one up.  I always figured when I was writing the screenplay that the producer or director would find a location, but when I began converting the story into a novel, I found I had to fill in a lot more detail.  I actually think the story works better in a completely fictional town, but some people may be critical that it is not as realistic as it could be.

Do you think that the cover plays an important part in the buying process?

The cover is absolutely critical, especially these days, where there are so many books displayed as little thumbnails.  If people don't click on your book, they won't buy it.  I am considering redoing all my existing covers in the Blind Prophet series, to improve them for purchase on the internet.  I had not researched enough what makes a good cover when I developed them with the artist.

What would you say are the main advantages and disadvantages of self-publishing against being published or the other way around?

Self-publishing gives you more control, but consumes a lot of time and energy that could be spent on writing.  These days, authors are probably better off self publishing, but to do so, you need to spend some time developing a strategy.  Creating a series of books within a well-defined genre is probably best, but is not something I am actually doing.

You get some status and credibility with a traditional publisher, but many times, they don't do all that much to promote your books, and take a high percentage of the revenue.

Do you have any advice for other authors on how to market their books?

You need to write a lot of books, and be willing to give some away to build a following.  One author I saw gives away four of his books, so fans can "start their collection!"  I think that is a bit of overkill on the principle, but the idea is to build a relationship with your readers for the long term.  I learned a lot about book marketing from two courses:

1) Self Publishing School - this one is designed for people who always wanted to write a book, and never got to it.  The course includes a step-by-step process to write and self-publish a book, using an Amazon Kindle-first strategy.  I bought it for the latter portion which deals with how to publish and market books, since I already had a book written.  It may not be the best choice for people who have already written a book, but it will definitely be helpful, even for those who have.  It is especially good for non-fiction writers.  You will learn about what makes a good cover, and how to position and market your book in Amazon, in particular.  Here's a link:
https://xe172.isrefer.com/go/sps4fta-vts/bookbrosinc2071

2) Your First 10,000 Readers - This course is focused on brand building and marketing, and is great for writers who write many books, especially if they are in a certain genre, and it is really great if you have a series based on a character or fictional universe.  It only focuses on marketing and self-publishing strategies, so if you are unfamiliar with all the details about writing and producing a book, the first option is better.  But, if you are a writer who has a couple of books that have not been selling well, even if you have a traditional publisher, this is a fantastic resource.  Both of these resources have very good free videos that you can check out.  Depending on where you are in your writing journey, you can choose which is best.  Here's the link for Your First 10,000 Readers:

What part of your writing time do you devote to marketing your book?

Right now, I am spending more time marketing than writing, which is not a situation I prefer.  But, hopefully, once we get through the launches of Blind Prophet, and When The Wood Is Dry, I will be able to put my head down and work on writing, again.  For me, it takes about 20 minutes or so to really get into that "writing zone," where I am totally absorbed in the task.  So it is hard for me to just squeeze in a few minutes here and there to write.

What readers have been saying about Blind Prophet


ByElon March 30, 2017
I enjoyed reading this comic/graphic book, such a quick and delightful read! At the end of the book, I was left craving for more. It is such a relief that there is mention of more to come! I loved the way the characters develop and draw you in to experience the story. I looking forward to how this story unfold. To me this has such a great message of how God often uses the foolish things of this world to confront the wise. It is always a wonder when what appears to be weak surprises everyone with outstanding abilities which is what the main character in this series is set to become.

Readers, if you read graphic novels or if you're reading something out of your usual genre let me know in the comments below.