via GIPHY
The Sunday Post is a weekly meme hosted  @ Caffeinated Book Reviewer. It’s a chance to share news~ A post to recap the past week on your blog and showcase books and things  received. Share news about what is coming up on our blog for the week ahead. See rules here: Sunday Post Meme

This week I went to North Dakota to spend some time with my brother in a city called Wahpeton.  Small cities always fascinate me because I live in such a big city like St. Paul. 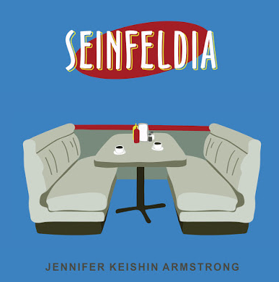 I also started listening to an audiobook based on the Seinfeld show called Seinfeldia. It gives a lot of neat facts about the show's writers and producers.  It tells you interesting things about the sets of the show and how one of the restaurant's was based on a real life Greek restaurant in NY which the show renamed it:Monks. I was surprised to learn:

Well that's all for this week folks, I hope you have a good week.

Reading: Dash and Lilly's Book of Dares by Rachel Cohn

Up Coming: Interview with author on Friday