Alexis Duran is joining me today. Duran was born and raised in the Pacific Northwest. At the University of Oregon, her fascination with people and relationships led her to major in Sociology, but her main love has always been creative writing. She's worked in museums, finance, film production and for several performing arts organizations. Her favorite job so far has been inventorying the collection of a haunted Victorian Mansion. She is the author of the Masters and Mages and Edge of Night m/m fantasy series as well as several stand-alone romances. Her fiction has won awards including the Rupert Hughes Award from the Maui Writers Conference. She lives with one dog and four and a half cats. She is currently working on the next Masters and Mages novel and always has several new ideas brewing. 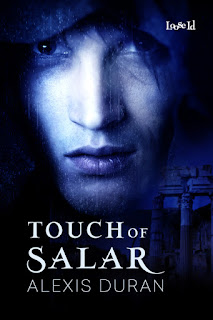 is with me today to talk about herself and her writing career.

What motivates you to write?
Short answer—survival. Seriously, this is a hard question for me because I’ve felt compelled to write since I was a kid. For me, writing is kind of like breathing- I just have to do it. I guess it’s a bit of an obsession. To not write would be akin to giving up an essential part of myself. It’s not like I have a burning message I need to get out there, I just love to write and immerse myself in story. This quote from Ray Bradbury pretty much sums it up for me:  You must stay drunk on writing so reality does not destroy you.

If you could talk to any famous writer, what would you say?
I’d love to have a conversation with Tom Robbins. I’d like to tell him he saved my life by showing me it was okay to be silly, outrageous, weird and wild on the page. In other words, it was okay to be me. I didn’t have to copy “great” writers. I didn’t have to craft perfectly elegant sentences or profoundly deep, earth-shattering prose. As a matter of fact, the less I tried to do those things the better writer I became. Reading Jitterbug Perfume was a profoundly liberating experience for me as a creative person.

What have you learned the most about feedback from your work this past year?
I've learned that characters I love are not necessarily beloved by readers! I think this might mean I have a thing for villainous heroes, or possibly my idea of a flawed hero is a bit more of a bad boy than a knight in shining armor. I do love my knights too. I think the takeaway from this for me is to be more aware of the all the different perspectives readers bring to the story. Not that a writer can make everyone happy, nor should we even try, but it doesn't hurt to really think about my characters actions from several view points, not just my own. That's another thing I love about writing. It always encourages me to grow and understand more about the people I share this world with.

What do you think of “trailers” for books, and do you have a trailer/will you create one for your own work?
I honestly don’t think about them. I’m not saying they’re not cool or effective, I just don’t have the time or resources to branch out into that area of marketing yet, and I have to say, I’ve personally never been swayed by one. I'm the kind of person who doesn’t have much patience with watching ad videos, so there's that.

Do you think that giving books away free works and why?
Free books, as part of a larger strategy, can be an effective means of getting your name out there and drawing in new readers. People will take a chance on an unknown (to them) writer if it’s a freebie, and lots of book promotion sites are out there to help promote giveaways. But you have to be careful—you don’t want to devalue your work for no return.  So while it makes perfect sense to offer a tie-in short story or the first book in a series for free in order to kick-start interest, I wouldn’t  recommend just putting your first stand-alone novel up for free and hoping it generates interest. Sure, people will download it, but they might not read it! Try to wait until you have a backlist so the people who do read it and enjoy it will be able to find something else by you to spend their money on. Or, you could try putting up some free flash fiction or short stories to build interest in an upcoming release.

If you could drop in on a book you read as a kid which book would it be?
No doubt about it—The Lion, The Witch and the Wardrobe. I remember crying when I finished the Narnia books. I wanted to live there so badly. I still do, which might sort of explain the writing addiction.

What have you written?


Lots! I currently have eight books out in the gay romance/fantasy genre. I have two series going; The Masters and Mages books, which are high fantasy, and Edge of Night, which are contemporary fantasies set in Seattle. I recently participated in a multi-author project called Order of The Black Knights released by Dreamspinner Press. I’m currently working on a new series of gay shifter romance mysteries, which is a total kick in the pants to write, and a twisted fairy tale set in the same world as Gryffon Hall, a fantasy of mine that has been very popular.
s

Readers, if you have any comments please write them below.